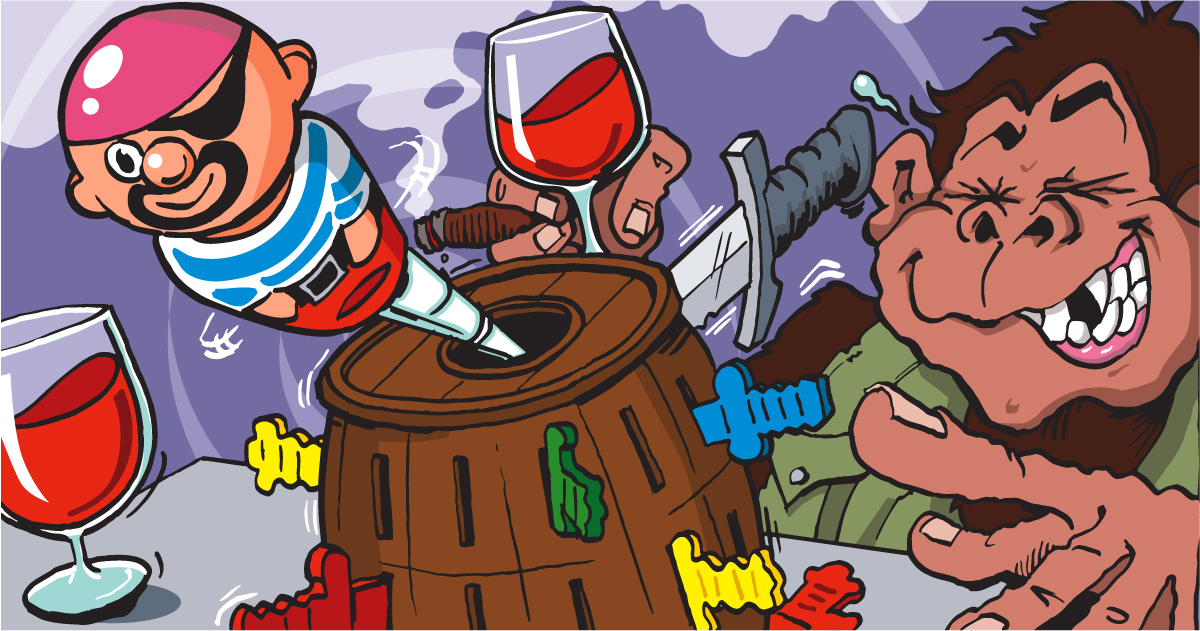 The Monkey has become a prolific reader. He has just finished ‘Beyond 2012’. I asked him if he believed in all of the end of the world stuff and he looked me straight in the eye and told me that when the world ends he will be responsible for it but at the moment he is having too much fun… Well there you go…
————

There seems to be an uneasy truce between The Monkey and next doors dog. They are playing what looks like poker underneath the gazebo. The Monkey is smoking a cigar again although he promised me he had given up.

The Monkey is doing more rituals. He has locked himself away in the spare room and I can hear chanting and a weird howling noise. He had an envelope full of dog hair with him when he went up – makes sense of the poker game now – and he mentioned enslaving next doors dog to his bidding as he past me on the stairs. I have asked him not to write on the walls again and if there is blood to clean it up…

The Monkey has reappeared with a strange, haunted look on his little face. I asked him what he had been up to but he just said, ‘I don’t want to talk about it man’. I think the use of ‘man’ was in the hippy vernacular as he has never called me man before, which is odd given his pathological dislike of hippies…

I checked the spare room – it smells of burnt dog hair and I found a small green steel helmet, with the words ‘Death From Above’ written on it, in the corner. I don’t remember ordering this for him or him sending off for it from one of his ‘special interest’ magazines…

Been having a deep, metaphysical talk with The Monkey today. Still don’t know what went on in the spare room but it was clearly weird even for him. He started by asking me a question ‘What if we are already dead? Or maybe we aren’t born yet, and we are in some sort of ante room waiting to become manifest…’ – I don’t know which concept troubled him more. I said that if he knew he had had previous lives before then how could he be dead or not yet born? ‘Maybe it’s just all a dream and we are just part of it…’ was his reply and then followed several hours of quite interesting but tortuous debate. He finally cheered up when I dug out a bottle of Port and he sparked up a big cigar and we played several games of Pop Up Pirate. He really likes the game, I think it’s the act of stabbing tiny swords into a captive pirate, and it always makes him laugh out loud when the pirate jumps up.

The Monkey is quite drunk now but in a better mood. He is ripping the piss out of the 2012ers on a variety of end of the world blogs.

Through a haze of cigar smoke I can see The Monkey playing with an early Christmas present. The throwing knives are smashing into the target with fanatical rapidity and accuracy. The target by the way is an old door with a variety of roadkill nailed to it and each piece of roadkill has a picture of a cabinet minister taped to it. It’s getting very messy and he doesn’t miss…

Went out for a pre-Xmas drinky poo with The Monkey today. Managed to get through nine pubs and ended up on the beach doing handstands. We tried to make a festive ‘sandman’, but it didn’t work out well – especially when I threw up on it. We couldn’t stop laughing and I pushed him off a sandbar into the river mouth – that wasn’t quite so funny as The Monkey doesn’t swim well when pissed. I ended up wading after him and the pair of us splashed about like a pair of total twats as dog walkers stared on in disbelief. We managed to find a chip shop selling kebabs and fortunately one of the neighbours saw us and gave us a lift home in the back of his van.

The Monkey is passed out on the sofa, covered in kebab salad and wearing the pita bread as a hat. I am typing this while gripping the chair to stop the room spinning…