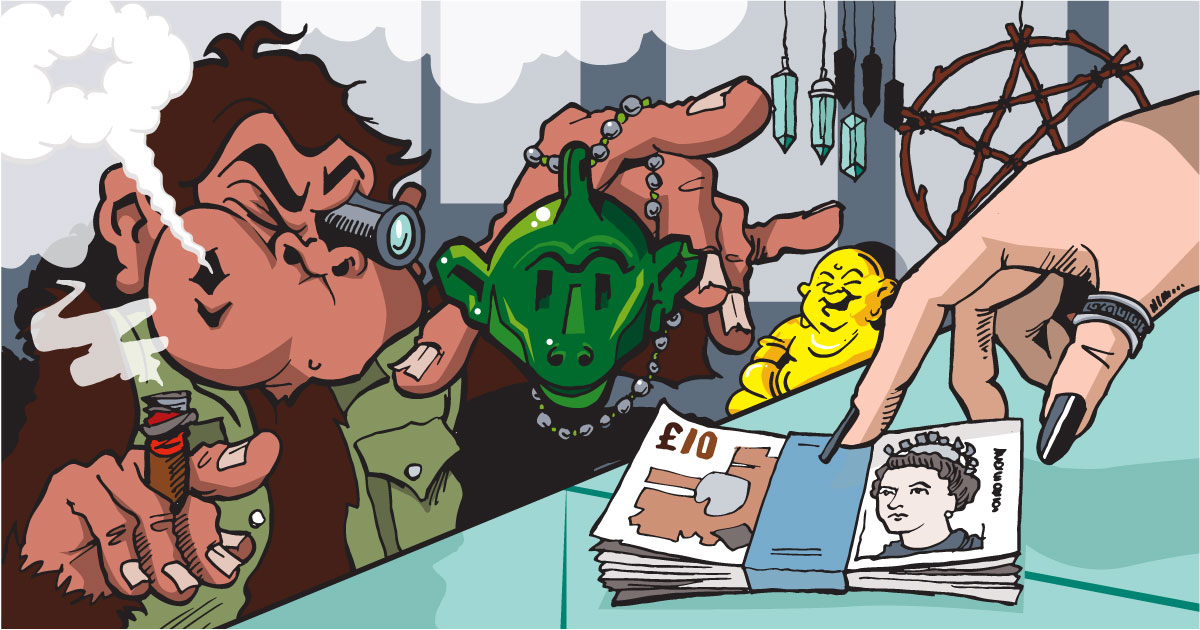 Have you any idea how freaky it is to see The Monkey rising out of the garden pond in the style of Martin Sheen’s Captain Willard? I lost him for a while last night and it was on the third pass of the garden that I shone the torch across the pond and saw him. I’ve seen some shit with The Monkey but that made even me go cold. He went up onto the top of the garden shed for quite a while after that despite my best attempts at talking him down. I left him to it in the end, mainly because it started to rain.

This morning the extent of The Monkey’s night-time excursion became apparent. The tires of the van were shot out and there was a dead sheep hanging down the windscreen, a bullet through its face. I questioned him about the lack of gun shots and therefore the lack of police cars. He just said ‘Home made silencer’ as if that was the end of it and then asked me if I wanted some pancakes. I did…

Well, the van is gone. Got towed away this morning. I am surprised that there haven’t been any police considering the obvious bullet holes but then again perhaps that goes some way to showing the clandestine nature of the surveillance we have been under. As I stood watching through the living room window The Monkey hopped up onto the window ledge and lit up a cigar. After a while he blew out a big cloud of smoke and said, ‘Smells like victory’, then he laughed and said, ‘Until the next lot’. I am sure he is right. We haven’t seen the end of the van men and next time they probably won’t be so obvious.

The Monkey is back on the occult books. He thinks we should have a look through the black hole and is searching for references to anything similar. We have quite a library in the house as I inherited rather a lot of old books from a slightly strange uncle, among the Victorian erotica these included a few esoteric titles to which The Monkey has been adding.

I’m not sure if I am losing the plot. I find myself agreeing with The Monkey’s crazy ideas and not knowing why. For some reason this seems ‘normal’, and if I’m honest, quite exciting…

The Monkey knocked out a delivery man today.

The guy came to the door to ask if we could take a parcel for the neighbours who were out. Anyway The Monkey answered the door and the delivery man asked him to sign one of those electronic pads they have but the Monkey had never seen one before so he wanted a better look and the guy got funny because he was in a rush and called The Monkey ‘a stupid ape’. Well, being a monkey, The Monkey has very fast hands combined with past life military training (it would seem) and he grabbed the brass knuckles that are hidden by the front door and put the delivery man down with a couple of vicious blows. I got there as delivery man bounced down the step and landed like a sack of shit. It took a bit of effort but we dragged him back to his van put him into the driver’s seat and, after tipping whisky down his throat and onto his clothes, took off the hand break and set the van rolling down the steep hill and into a tree in the hedgerow. Then we ran like fuck back to the house. The Monkey held up the neighbour’s parcel and rolled his eyes before running back out again and lobbing it into the passenger seat of the van and then sprinting back. He reckons that no one saw us and to be honest it was quite a while before anyone went out to the van. An ambulance turned up after a bit with a police car in tow and they carted off the driver and then dealt with the van.

We have had no visits so far, but I am guessing that when the driver comes round and tells them his version of what happened we will get a visit from Plod…

The expected visit materialised around midday, but it went a lot better than I had thought it might. Seems the driver started telling the police how he had dropped the parcel off with us and then got right hooked by The Monkey. But the police had checked his van and found the parcel and of course he hadn’t managed to write a card and stick it through next doors letter box so that blew his story apart. Plus the fact that we had managed to get at least a couple of doubles down his unconscious throat and soak him in whisky all just pointed to the fact that he was pissed and had lost control of his vehicle. The police visit just turned out to be a formality and the officer had quite a laugh with The Monkey.

Seems we didn’t get away totally unobserved though. Next doors dog told The Monkey that he had seen everything but that the ‘bastard had asked for it’ and that he had been going mental barking at him and would defiantly have bitten his face off. He said that we had nothing to worry about – he wasn’t going to tell anyone. The Monkey told me that the dog is all talk and would have pissed himself if he had been face to face with the driver, plus he said the dog knows that he would end up as a hat if he blabbed…

Lovely day today so me and The Monkey drove up to Tintagel and had a walk along the cliffs to Boscastle. Plenty of new age pagan sorts about – the nice weather brings them out you know. We stopped off in a pub (well it would have been rude not to) and were treated to an overweight, middle aged woman in multi coloured velvet talking loudly about how enlightened she was and how she knew all of the ‘real’ masters either in person or on the astral plain. We did our best to ignore her but after a couple of Rattlers she seemed to be the only thing we could hear. Then she expounded upon the concept of ‘twin flames’ and how your perfect matched soul was out there, even if they didn’t know it. This developed into something quite weird and stalkerish as she advocated basically just being there all the time, even if the other person had no idea who you were, as eventually they would see the light and realise they love you – or something like that! The docile chumps she was surrounded by all nodded knowingly and made little appreciative noises as she then pontificated about golden auras, purple children, pyramid power and the usual Lady Bird book of the New Age tripe that passes for law amongst these sorts. The Monkey was remarkably calm during all of this. I really was expecting him to jump onto her table and shout abuse or perhaps punch her in the tits. Instead as we got up to leave, he made a detour around the back of her chair and did a massive shit in her cavernous shoulder bag. Sometimes you have got to love the fact that The Monkey doesn’t wear trousers and seems to be able to crap on demand.

Anyway, we left the pub and went into the occult/new age shop by the bridge and had a look around. Mostly fairies and Buddhas and Wiccan stuff but then The Monkey stopped dead in front of a little glass case by the window and pointed at something right at the back. There was a Moldavite pendant, a deep glassy green, and it was carved with a monkey’s face – The Monkey’s face. He paid for it (rather a lot) and as the woman wrapped it in tissue paper, he asked her where it was from. She said that it had come from a private collection that the shop’s owner had picked up at auction a few years ago but that most of it had come originally from the Far East – Thailand, Vietnam, Cambodia etc. – and that the monkey piece was quite unusual because Moldavite wasn’t usually carved, which is why it was so expensive. I asked why, if it was so unusual, no one had bought it before now? She said that no matter where they put it no one seemed to notice it and if they did they passed over it very quickly. It made people feel uneasy.

We walked back via the road as a couple of Rattlers doesn’t make for safe cliff path walking (at least for me) and all the way back The Monkey held the pendant in his hand and every now and then he would stare at it and make little, quiet, monkey noises…

The Monkey was pretty quiet and thoughtful last night. We drank a fair bit of Jack and he smoked a few cigars but mostly he just stared at the pendant. I have learned to leave him to it when he is like that and he normally comes out of it on his own soon enough.

This morning he was mostly back to normal. I asked him if he wanted a chain or something so that he could wear the pendant, but he said that he had used a length of string and hung it on a nail by his bed. Then he made a massive pot of coffee and bitched about the sudden turn in the weather again while we guzzled mug after mug. He wondered if the Priestess of the New Age enjoyed her bag of poo and we laughed until we were blowing coffee out of our noses.

The Monkey had a chat with next doors dog this afternoon. The dog spends most of his time looking out of the window and barking at anything and everything that it sees – The Monkey blames the cocaine – but it seems that the house down the street that has been up for rent had some potential new tenants come to look around yesterday while we were out, and the dog recognised one of the van men amongst them. We knew they would be back, but this looks more serious…

Do you want to buy a second hand caravan?