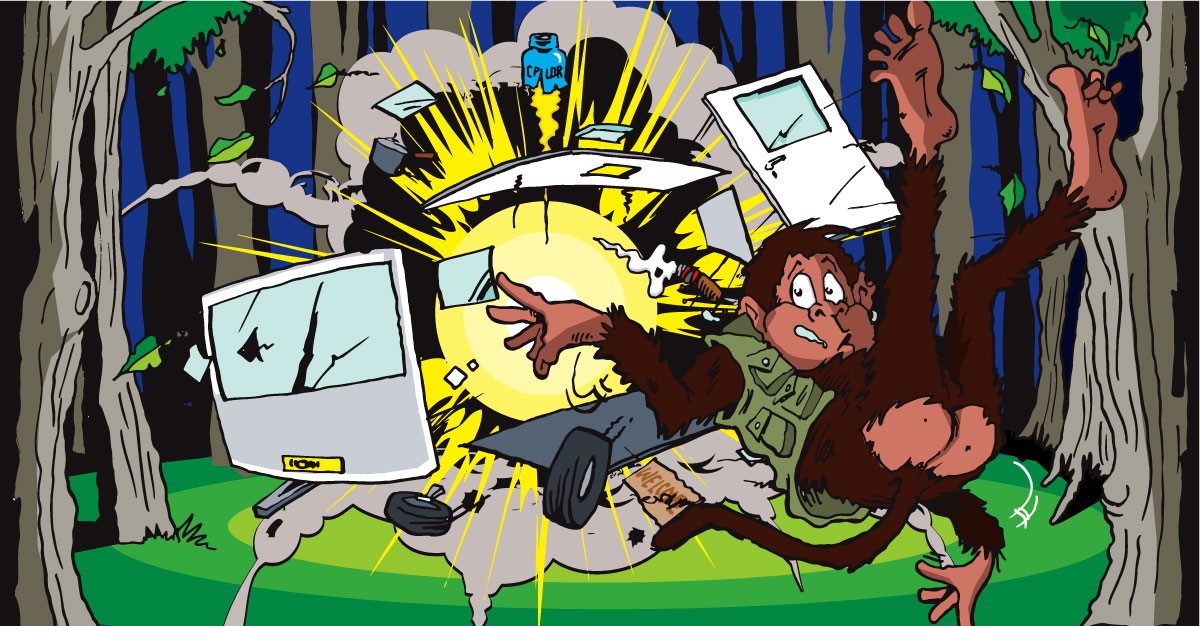 We have shuffled the lolly sticks and split them into two groups, The Monkey is keeping one and I have the other (there’s not many occasions you can say that in a sentence!). We figure it is the best way to keep them safe.

The Monkey took us all for basic combat training this morning and it quickly became obvious that although the nerds knew lots of martial arts terms and the names of different guns and knives, they had never ever hit anyone in anger. If they are to join in this carnival of violence they had better get it straight, and quick. They say they want to help but I am not sure they really understand.

This afternoon they are back to what they do best – risking their health in the name of science by hurling homemade monitoring devices into the black hole. The Monkey has stationed himself by the loft window to keep an eye out for the car full of Orientals and I am checking out the cost of flights to Cambodia on the newly acquired laptop…

Pretty uneventful today. Tried to do some work while The Monkey intermittently studied his maps and spent time watching from the loft window. He hasn’t got a great deal of patience.

Think we will go to the pub in a bit to break the boredom. Just have to hope The Monkey doesn’t pick a fight…

The Monkey had a pretty bad hangover this morning. We didn’t go to our local last night but instead ended up in town. There were a few stag parties around and we managed to join in with a group of lads for a while. I had already decided that I was going to attempt to stay relatively sober just in case The Monkey did decide to kick off. In the end we managed to have a good night without any damage other than to The Monkey’s liver.

The third nerd has arrived, still wearing the Atari t shirt, although it had been washed. His name is Dave and I felt slightly guilty meeting him after having been partially responsible for him believing he’d had a seizure. The other two got him up to speed pretty quickly and his face was a mixture of raw terror and childish excitement as they showed him the black hole and explained about the lolly stick stars, the Orientals and the Monster Highs. I thought he was going to shit himself when The Monkey, cigar between teeth, came strolling in and just looked at him before heading to the kitchen.

I have found some cheap flights to Cambodia and now we just need to decide when to go. The Monkey would leave tomorrow but we need to sort a few things out first – not least our oriental friends. I don’ t really want them wrecking the house while we are away, and it would be unfair to leave the nerds to face them given that the last lot were armed. The Monkey wants me to ask the neighbours if they have spotted them again and also what sort of car they were in. I will go and do that in a bit. He is cooking something up, he has that look, and he is impatient to go to Cambodia…

Neighbours told me that the Orientals had been spotted two days ago driving a beat-up sliver BMW. The Monkey is pleased with this intel and is heading off to scout the area…

I can hear sirens and there is smoke in the distance in the direction of the woods. One of the nerds says they heard a noise like a distant explosion a while ago. I don’t know where The Monkey is, and I have a bad feeling…

I found The Monkey lying in some undergrowth at the side of the road. If he hadn’t feebly managed to wave at me I would have missed him.

It seems he spotted the Orientals and followed them to a clearing in the woods where a caravan was parked. He watched and waited for a while and then decided ‘fuck it’ and lobbed one of his IED’s through a window. The caravan went boom, far more than The Monkey had anticipated (he thinks there was a Calor Gas bottle in there along with munitions) and he got caught in the blast. Mainly concussion and a few burns, I think. He refuses to go to the hospital as he says there would be too many questions. The suggestion of going to the vet, which I made from a safe distance with a large grin on my face, was met with a torrent of abuse, and fortunately there was nothing at hand to throw, not even shit on this occasion. Anyway, the Orientals are toast.

I have patched him up as best I can, and given his awesome recuperative powers I think he should be okay in a few days. Close one though – didn’t realise how much the thought of losing him would affect me…

The Monkey is singed and sore today. His head seems okay although he has a pounding headache but like he says, ‘that’s what happens when you get blown up!’

Probably unfair of me to ask while he has a bad head but as he isn’t about to run off I thought I would ask him a question that hasn’t really occurred to me before. I asked him why his previous companion had given him to me? Couldn’t he take the stress and lunacy anymore and was I at some point going to have to do the same thing for the sake of my own sanity? The Monkey thought for a little while and when he answered he looked genuinely sad. He said that his previous companion had contracted an illness and they both knew he was going to die before too long, this had been about the time when The Monkey had realised that he had to be somewhere other than on board a ship for the rest of his days. The other man hadn’t wanted to give him up but he knew that The Monkey needed someone else and so at The Monkeys suggestion they had found someone (me) and we had played Othello to determine whether I was a worthy companion. It struck me that I had never asked why Othello? The Monkey said that there was something about the game that he could not explain but that the way I had played had told them all they needed to know.

I have left The Monkey to sleep but I do keep wondering, one day will I be playing against someone else for him and hoping they win…

The Monkey is feeling a bit better today – I’ve had to keep him away from the Jack.

We have been watching local news reports and it seems that the police think that the caravan was being used by a terrorist cell who accidently blew themselves to bits. Fair enough. It keeps the authorities away from us and might just dissuade any others from coming if they think the police are on the lookout for them. The Monkey is quite pleased with himself…

Forced the nerds to watch the three hours of UFC with us and drink a lot. We dragged them out lunch time as well and rounded off a nice carvery with several pints. Kev is doing quite well, and Dave is giggling at everything but Tony has passed out in the corner after throwing up in the garden. We have propped him up so that he doesn’t choke, and The Monkey has drawn a massive wang across his face – I sympathise. I wasn’t sure The Monkey should be drinking but he told me to fuck off and proceeded to down several pints of Guinness. He got a few odd stares in the pub as he has a couple of sizeable scorch marks on his fur but apart from that he seems pretty much none the worse for wear. He has just fetched the Jack and Kev has suddenly got a worried look on his drunken face. Must admit that I feel fairly pissed and The Monkey is wobbling quite a bit. Have to hope I don’t pass out before him – need to visit my accountant in the morning and I would rather not do it with genitals and swear words daubed all over my face…

Sweet dreams aren’t made of this