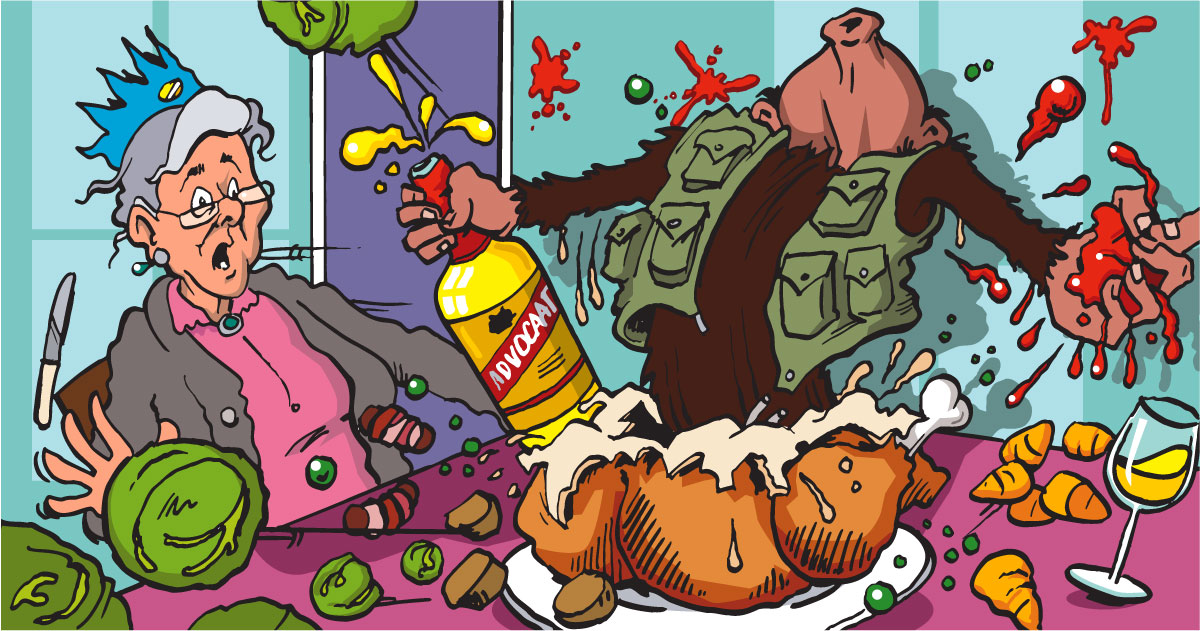 24 December
Been a day of bad heads today… The Monkey eventually appeared around midday and has been huddled on the sofa ever since with his shades on. He is still picking kebab salad out of his fur. Think I will stick the Elf DVD on and suggest a hair of the dog. One of those things might perk him up…

Okay, bad choice of words… After that last ritual the mention of dog hair made The Monkey bolt to the top of the bookcase and he wouldn’t come down until I had explained that what I was suggesting had nothing at all to do with hair or dogs. Not sure he still trusts me but it is Christmas Eve, so a Moscow Mule and Buddy the elf heading south have at least got him back on the sofa…

25 December
Merry Christmas! The Monkey has been very good about not ransacking the house for presents so we have some lovely surprises…

Someone suggested I buy The Monkey a fez, so with some trepidation I did. He took it quite well and has even worn it for most of the morning. His other presents from me consisted of a box of cigars (I have given up trying to get him to quit), the DVD box set of Band of Brothers, Hungry Hungry Hippos, a bottle of Jack Daniels, a vicious looking SOG combat knife, a new teddy bear, the collected works of the Golden Dawn and a night scope. He got me a load of things from Firebox I think – lollies with scorpions in them, tequila with scorpions in it, chocolate loaded with habanero chilli, a cool iPod speaker and what look like stun grenades (I don’t think they came from Firebox – where the hell does he get this stuff from?).

The Monkey thought it would be funny to give my family a surprise for Xmas dinner. I bought a very large turkey, so I cooked it yesterday and let it cool overnight. The Monkey must have climbed inside it – I did wonder where he had gone. I placed it in the centre of the dinner table and just as I was about to carve The Monkey came bursting out through its chest like Alien. We are now spending the rest of Xmas day alone as terror induced by the spectacle caused all present to flee in panic and Aunty Grace to lose control of her bowels… The Monkey doesn’t seem to mind. He is drinking Advocaat and eating handfuls of cranberry sauce off the walls.

28 December
The Monkey thinks we should go out tonight. He has found a club with a Goth night and is now hunting out black eye liner. Not quite sure where it is but I’m game!

29 December
Woke up in a Travelodge with The Monkey and two girls who looked like Monster High dolls – or at least their older sisters. The Monkey was already awake and going through their handbags. I stopped him and we quickly got our stuff and made a very ungentlemanly retreat from the trashed room – giggling…

Last night’s club was the usual dark, sticky floored affair, and the usual selection of ‘children of the night’ were in attendance. Emo kids who looked like they had just fallen off the pages of a Manga comic, pretend vampires looking down their pale noses contemptuously at those not in their clique, random industrial, techno and fetish Goths wearing rubber, leather and UV armour, the odd Fields of the Nephilim cowboy, and a surprising amount of fat Goths – Robert Smith look-a-likes to a man. We hit the bar with a vengeance although we had already downed a half bottle of Jack on the walk up to the club, and very soon the dry ice, swirly gobos and throbbing drum machines got us up on the floor. In fact we cleared the floor at one point as we Gangnam danced to Sisters of Mercy – got some hate for that one. I also remember an epic pogoing session to some thrashy industrial track.

All a bit of a blur after that. Piecing together our memories it appears we managed to offend many people and even have a minor scuffle with some Chavs on the way back from the club. Seems they were giving the Monster Highs a hard time and we rescued them only to then lure them back to the Travelodge with promises of more booze and 50 shades of Me and The Monkey.

Having a big fry up at a roadside café at the moment. I have just told The Monkey what black pudding is made from and he is now staring at it as if it has committed a war crime…

Going through the pile of clothes on the floor to throw into the washing machine and in the pocket of The Monkey’s black leather trench coat there are loads of I.D’s – student Union cards, driving licences and citizen cards. By the looks of the photos they are all Goth/Emo types, so I am guessing that they have come from the people we shared the club with last night.

Asked The Monkey to explain his new found love of collecting I.Ds and he just said that it is always good to have other forms of identification, especially when shopping on line for some of the more legally dubious stuff that he seems to procure. ‘A bit like having someone else’s fingerprints on your knife.’ was, I believe, how he phrased it.