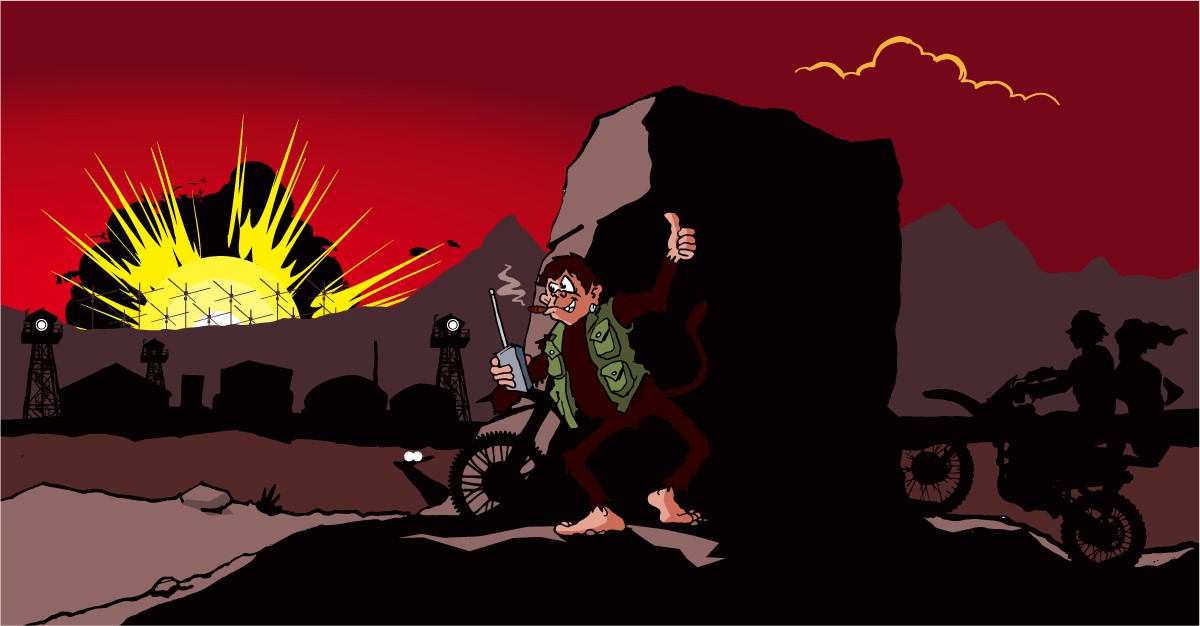 AA-12s are the fuckin’ bollocks! We set up some chunky wooden targets in the woods and watched them disintegrate. We all had a go, The Monkey wedged himself against a tree and shot from the hip so he wouldn’t get knocked on his arse, and we all came away with massive grins.

Johno has offered to go through the black hole with us and dig in to cover our escape. The Monkey has agreed despite expressing reservations about Johno before the last time we went through. I think that is an indication of just how rough it is going to get.

First we went east to the HAARP installation leaving Johno and one of the girls to guard the black hole on the desert side. There were a few sentries patrolling but using the Monster High fog and The Monkey’s stealth training we took them out without any problem. Checking over the bodies it was obvious that they were private contractors not regular army and that made us realise just how off the grid this whole thing was.

We liberally sprinkled the magic pixy dust of thermite charges The Monkey had ordered around the antenna array. It was vast so we couldn’t cover all of it but we hit a good cross section including the generators. Kev was fascinated by the fine mesh that arced over the whole site; it was almost invisible in the dark. He believes it is some sort of invisibility cloak, a bit like what the Monster Highs do but using technology to reflect the surrounding empty desert over the installation. That will be why the Chinese satellite couldn’t keep constant images of it. We set timers and then booby trapped the timers and headed west towards the compound.

The Nerds had done some research and they reckoned that the Tesla coils in the towers ran in series, their reasoning being that there was no way that anyone could control that much power if they were linked up any other way – and after all, they decided, the towers had been put there to keep something in and they had never expected an attack on the towers themselves. So, we needed to take out one of the towers to break the chain and the one on the ridge seemed favourite. Me and The Monkey gunned the bike up to the top of the ridge and set a pretty large charge at the base of the tower. We had two reasons for wanting them out of the way – one, they are fucking lethal, and two, without the towers we were hoping that those in charge in the compound would not risk releasing the test subjects.

Back down on the desert floor we regrouped and pushed the bikes behind a rock outcrop to wait for the fun to begin. A series of massive explosions lit up the sky to the east as the HAARP installation went to meet its maker. Even more lights came on in the compound and very quickly armoured vehicles began to race through the gates heading in the direction of the firework display. When the last one had disappeared, we watched the towers around the compound begin to flicker into life. The Monkey gave it a couple more minutes and then pressed the remote detonator and we watched a ball of fire erupt on the ridge and then one by one the towers around the compound went quiet.

This was our moment and we belted at full tilt towards the compound. With me and Kev steering, our pillion passengers opened up with automatic fire, and The Monkey took out a watchtower with the grenade launcher on his weapon, then he took out a whole section of fence and we were through and into the compound. I looked over and saw that Kev had clipped a section of the trailing wire and skidded the bike onto its side but as I watched the Monster High rolled gracefully and sprang back to her feet like nothing had happened while Kev scrambled back up and they both took cover behind a row of metal tanks. I threw our bike along the side of one of the low buildings and almost before it had stopped The Monkey was off and throwing pipe bombs. Then I heard Kev’s AA-12 and I unslung mine and the massacre began.

We shot and blew up anything that moved or stood still. With all of the decent fire power heading off into the desert we had no real competition and we had guessed right – no one had the guts to activate the test subjects with the towers down. Only one real disappointment, when we blasted our way into the large building there was no sign of Arno Whitaker. I am pretty sure that if he had been there then he would just have set off the inmates regardless of consequence. So as the buildings disintegrated, and the compound fences collapsed the test subjects actively walked into the fires or stood in the way of the exchanges in gunfire. I have no idea what horrors they had been through, but they had no intention of passing up this chance of ending their pitiful existences. That just made us angry and we hunted down anyone who was responsible for their plight – lab coats or private military – they all died.

Kev found a fuel store and we set some charges and then got the fuck out of there. As we raced back through the desert, we were illuminated by the fireball that had been the compound. The Monkey was flickering with his own fire and he leaned close to me and whispered, ‘No survivors,’ and we headed back in the direction of the HAARP antennas. We could soon see the still-burning wreckage from the thermite charges and the lights from the armoured vehicles, that was when The Monkey pressed his other remote detonator and the arc of claymore mines he had set tore into the patrol. Once again, we opened up with everything we had, and The Monkey’s armour piercing rounds rattled through the vehicles while the AA-12s turned human beings to pudding.

Back at the black hole we found that Johno and the Monster High had been having fun. Looks like it had been sussed that we were using the area as a staging post; perhaps they thought it was some sort of chopper landing zone, anyway they had sent a couple of vehicles to secure the area and cut off our retreat. These had been dealt with in no uncertain terms by RPG and assault rifles. As we surveyed the damage done, the girls suddenly got very agitated and said that we needed to go back through the black hole immediately. So, through we went, and there the other two Nerds were jumping up and down (Dave sort of hopping because of his bad leg) as they pointed back at the hole. Everything was turning into a swirling vortex and the image of the desert with its burning wreckage and mangled bodies disappeared to be replaced by blackness. We got the Nerds to seal it up again with their grid thing and then we all just sort of collapsed.

The adrenalin has well and truly worn off now and I just ache. We have checked each other over and apart from some fairly minor cuts, bruises and burns we are all in pretty good shape. In fact, Dave’s lawn dart wound is still the most serious. Not sure how this is all going to play out mentally, especially for Kev. I think he has partitioned it into a game of Call of Duty and is treating it as such, I hope he can keep that reasoning going. I think a stiff drink is called for and I am fairly sure I just saw The Monkey rolling a spliff…

Sent a message to the Green and Red Society today, not so much to tell them what we did as I’m sure they are well aware, but to ask their advice on the shift in the black hole. It is still showing just black and their feedback would be helpful. Apart from that we have tried to chill out and get the sight and scent of death out of our minds.

Going in the sea and then having a mad game of football on the beach has helped. The Monkey and Johno don’t suffer the post combat stress of us non-military types. In fact Johno has homed in on some more ladies on the beach and has wandered off to seduce them with tales of daring-do and his apparently irresistible abattoir worker’s charm.

In the meantime me and The Monkey are sitting in the sun outside Coasta Coffee – the little coffee shop by the beach – while The Monkey smokes cigars and we drink large Americanos that we have heavily laced with Jack, and eat massive ice creams. What? It’s healthy to vary your diet…

The Green and Red have responded to our questions saying they believe the black hole has shifted in line with some cosmic pattern. It’s like turning a combination lock and each time it clicks it opens up a new pathway – apparently. They think that at the moment it is still turning and that’s why it is black. They have sent some of their men to check the monkey temple just in case anyone has managed to blast their way into it but they are pretty sure their theory of it as a turning lock is accurate…

Johno is AWOL again. Probably not vampires this time as the women were sunbathing. The Nerds are testing their own theories on the black hole and the Monster Highs are sleeping a lot – they had no problem with the mass slaughter, but I think they need to eat again.

Me and The Monkey? Well, we are just enjoying the sun and placing bets on where the hole will stop next. As we have no real idea, we have taken to throwing darts blindfold at a map of the world, and it seems The Monkey has the hole coming to rest in Tanzania while I am odds on for mid Pacific. Who needs science…?

Johno has gone back wherever he goes. He turned up late last night with a very self-satisfied look on his face and helped us drink a bunch more Jack while he told us tales of manly daring-do as a contractor working in the world’s worst trouble spots. He obviously has vast experience and isn’t just all talk but I can’t get over the fact that The Monkey is not totally comfortable with him.

Spent a good deal of today asleep in the garden. It’s all gone very quiet – but The Monkey keeps saying it’s the lull before the storm…

The Monster Highs have decided to go home for a bit. I think there is more grave robbing afoot. And the Nerds have moved back into their house up the road after the girls gave it one more going over and fried any electric device that was in the house (mind you, they will still be at our house at least 70% of the time).

The Green and Red sent us another message saying that they had seen pictures from the Chinese satellite showing the carnage in the desert. We really wrecked the HAARP installation, that won’t be fucking with our nice weather anymore.

Seems a bit odd not getting ready to kill the shit out of anything. We did a couple of hours training this morning and I can tell that The Monkey is still edgy, he wants to be getting on with whatever comes next. Lots of cigar smoke and JD as we wait for Terminator 2 to start. Is it wrong to fancy Sarah Connor? No, of course it’s not…