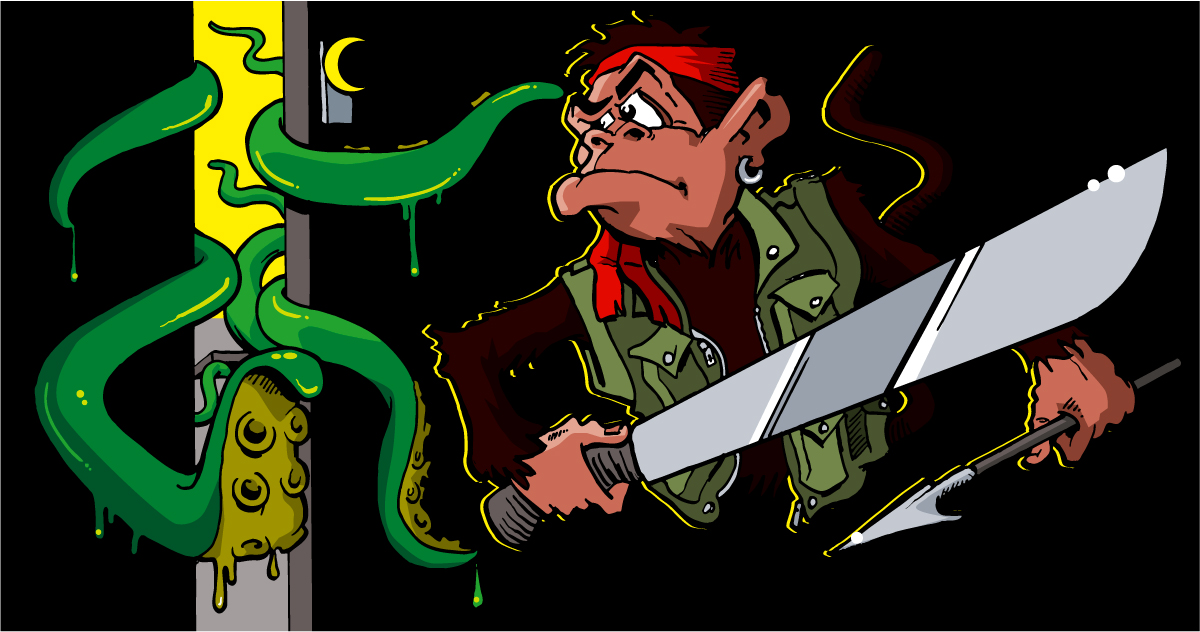 Gangnam dancing with The Monkey. Dead funny until I told him he had no rhythm. He’s still hanging off the curtain rail but at least he has run out of shit…

The Monkey came home in the early hours this morning. He had been clubbing and was pretty smashed. I didn’t hear him come in even though he let himself in with a brick. It was the smoke alarm that woke me up. Little bastard was trying to cook chips and he had passed out in the sink. Fortunately, I put out the fire before it got out of control then I turned the cold tap on him to teach him a lesson. He just crawled out onto the draining board, farted, and went back to sleep…

The Monkey has finally got over his hideous hangover, but it has left him in an evil mood. He just gave next doors dog a kicking. I think he has been watching too much Dog the Bounty Hunter – I’m sure I heard him scream ‘Go with Christ’ as he pepper sprayed the poor beast.

I went into the spare room earlier and I am convinced that there were tentacles coming out of the black hole in the carpet – it’s possible I could have imagined it as they disappeared almost instantly… I told The Monkey and he put down his copy of Soldier of Fortune magazine and went up to his room. After a couple of minutes of bumping about he reappeared with one of his machetes and what looked suspiciously like a spear. He said he was going up to the spare room for a bit and I could swear he also said something about calamari for dinner as he headed back upstairs…

Well I must say, that was the best calamari I have ever had – and the biggest! The Monkey is laying on the sofa with quite a bulging belly. He looks like he has swallowed a cricket ball, and as he downs his third glass of Chianti, he looks very pleased with himself. Fair play to him but I do hope those sucker marks are going to fade…

Ever since The Monkey came to stay with me he has talked about having lived before, and I don’t mean a sordid past as a pole dancer. I thought he was taking the piss but he seems really serious. I know he has some pretty wild dreams which he puts down to his ‘past lives’ but lately he has been coming out with all sorts of stuff that I’m convinced he couldn’t know about, even with his increasingly frenzied Google searches. I think I will take him to a hypnotist and see if they can do a regression on him and then maybe we can find out if this is just more of his crazy monkey ‘mess with my head’ bull shit…

Nice day today so Me and The Monkey went to the zoo. Wasn’t sure if seeing the other monkeys in cages would upset him but he just laughed at them and kept making L for loser signs with his little hand. For some reason the penguins got him angry and there was a lot of shit flinging, but I bought him an Almond Magnum and it was all cool again. Took me ages to find him when it was time to leave though – finally found him acting as the referee while the buffalo played conkers.

One of the neighbours has put up a whole load of Xmas decorations on the outside of his house. The Monkey is fascinated.

Fuck! I’ve just seen The Monkey run past the window with a machete in one hand and the severed head of an LED reindeer in the other…

She who is death