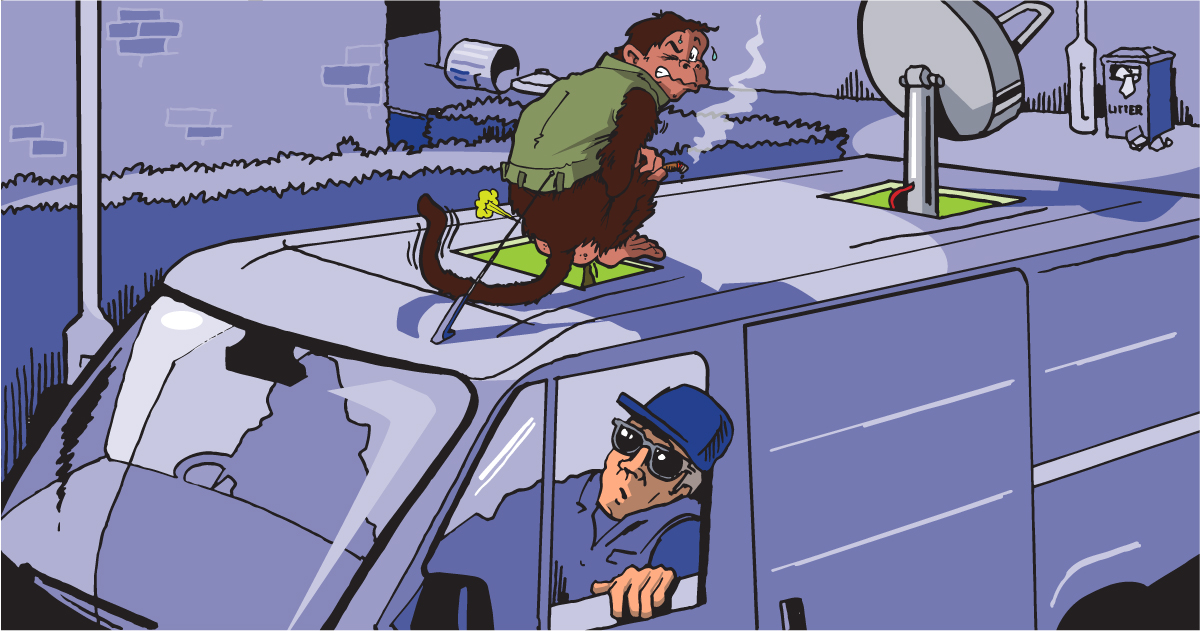 Bugger… Couldn’t keep The Monkey away from the van for ever I suppose. We are back to one van as the spare room has gone very quiet, but I should have guessed that The Monkey wasn’t going to let it lie. I can see him up on the roof of the van, perched over a small hatch from which they poke their scanning equipment, and he is taking one hell of a crap. Explains the three helpings of chilli and beans he had lunch time. He did keep his promise about the IED though but I’m not sure if this doesn’t constitute a biological weapon attack…

Seems that they are not sleeping in the van overnight, so it wasn’t until they let themselves in this morning that they found The Monkey’s gift. I could hear the swearing and retching from here. Most gratifying said The Monkey. Took them all morning to clean it out and many cans of air freshener.

I went out to get some more printer ink this afternoon leaving The Monkey reading a book on Max Planck. His reading is getting more and more sophisticated. Don’t get me wrong, he will still pick up a 2000AD comic or pulp fiction paperback at the drop of a hat, but his literary tastes have moved outwards yet again as has his understanding. I noticed that next in line in the pile of books by the sofa is one on Tesla followed by a history of the Mongol invasions.

When I got back I parked the car and as I walked towards the house I glanced at the van. Spray painted in black on its pale blue side is now a four-foot cock and balls plus spiky pubes and schoolboy spunk trail – it’s like being 14 again. But next to that, and obviously written in marker pen, is this – “All matter originates and exists only by virtue of a force which brings the particle of an atom to vibration and holds this most minute solar system of the atom together. We must assume behind this force the existence of a conscious and intelligent mind. This mind is the matrix of all matter.” Signed – Max Planck. No prizes for where that came from then…

Drunken game of Twister with The Monkey. I fell on him. Him not happy. Big monkey lip and shit flinging because I laughed so hard. I didn’t see the plant pot coming though.  Little yellow cartoon birds flying round my head. Cheered The Monkey up no end – he spent ages chasing them and pulling the wings off until they finally disappeared. Both nursing injuries now, The Monkey bruised ribs and me a cut on the back of my head. Still, nothing a couple of rounds of shooters can’t fix…

Seems a road trip is in the offing. The Monster High lookalikes from our Goth night phoned up. Apparently, The Monkey wrote our phone number on both their arses with a Sharpie. They want us to go to some Goth get together in Nottingham with them.

As The Monkey is fond of shouting – ‘Adventure!’

The van disappeared yesterday evening but it was back bright and early this morning with The Monkey’s artwork removed. I’m guessing a heavy weight T Cut session was enjoyed by someone.

The Monkey had some strange dreams last night. He was making really odd sounds and after deciding that they weren’t sex noises I went in to check on him and found him sitting bolt upright in bed with his eyes wide open but still fast asleep. Spooky. I asked him this morning what he had been dreaming about and he went quiet for a bit and then said, ‘the jungle – the jungle and death’. Took him a while longer to elaborate but it seems the Vietnam past life stuff is flooding in again. He believes that he was a member of a covert group called ‘Project Phoenix’ that was embedded with the locals way behind enemy lines. With the aid of these friendly locals they operated kidnap and assassination missions amongst the VC to gather intelligence and just generally put the fear of god into them. The Monkey is such a prolific reader that I can’t tell whether he is genuine or making it up but he does seem to know lots of detail and he gets a look about him that I don’t think he could act.

We went to the cinema and have just got back from an early showing of Seven Psychopaths. Very entertaining, The Monkey laughed all the way through…

Ah the simple joys of a monkey knife fight, at least that’s what he claims it would be. I have refused to get involved…

We are watching reality TV simply because neither of us can be bothered to reach the remote which is on the shelf by the DVDs, and The Monkey is getting more and more exasperated by the wannabes who are humiliating themselves for the entertainment of the masses. He can’t grasp why anyone would willingly do this – and I am afraid that I can’t give him an answer. We both agree that it is far better to not be in the spotlight as you can get away with far more shit if no one is looking at you…

Bat out of Hell

Spear of the Sun

Back to the Beginning…