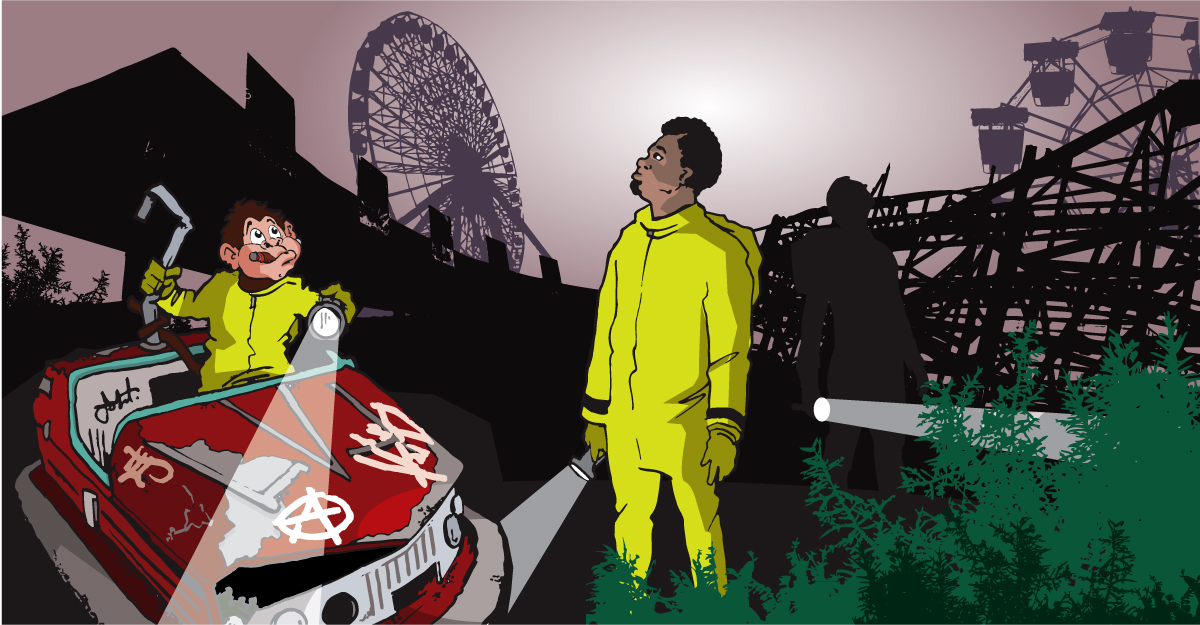 The Green and Red Society weren’t much help, but they did say that we should take the monkey finger with us and see if it pointed at anything. Good idea. In all the JudyZ excitement we had forgotten about the finger.

But we now have the Hazmat suits and decided that we would carry them through and leave them somewhere safe until nightfall. Until then we decided to do a bit of sightseeing. We popped through the black hole in two groups and tagged onto a guided tour we had seen wandering through the ruined town. The girls used their voodoo again to make us blend in and we spent a day looking around the wrecked remains of other people’s lives.

Obviously when the incident occurred everyone just got the fuck out ASAP so they left everything that they couldn’t pick up and run with. Since then some people have been back to salvage a few things but mainly the looters have striped anything and everything that was left and vaguely of interest to them or someone else. Consequently, Pripyat is a cross between a ghost town and a salvage yard.

Our highly excitable tour guides led our party of backpackers, thrill seekers, academics and other assorted rubberneckers across the town and eventually to the reactor core and its concrete tomb. Everyone went, ‘Ooh,’ and, ‘Ahh,’ and photographs were taken, and questions asked, and then as the tour was coming to an end we detached ourselves from the group at a convenient moment and made our way back to where we had hidden the suits.

It was all a bit odd really, sort of a day trip for the Whoops Apocalypse generation. Had we seen anything out of the ordinary? Yes. Everything was out of the ordinary. Had we seen anything of interest to us? Who knows? I had been holding the monkey finger in my pocket and it had made some significant twitches in the vicinity of the rusting amusement park so I guess that will be our starting point.

All I can say is that I am glad there was no one around to see us. Three adults and a monkey in Hazmat suits wandering around in the dark waving a mummified monkey finger about. We must have looked like a trailer for the worst end of the world movie ever made!

The whole place is very eerie in the dark and surprisingly easy to get lost in. We placed little LED lamps on road intersections to mark our route and we blundered about for an hour around the outskirts of the amusement park getting increasingly hot and sweaty until we decided to ditch the suits before making one last sweep of the area. Can’t really explain the reason for this logic but I am sure I felt the finger twitch when we were on the tour and that was the only movement it otherwise made. But without the thick Hazmat gloves on it was quite a different story.

Perhaps the finger needs contact with living organic material in order to do its thing but whatever the reason, it started to twist in my hand the instant I picked it back up. We turned to follow the direction that the finger was pointing and found ourselves facing the amusement park once again, a rotting Ferris wheel stood out against the sky and we made our way past rows of swings and the remains of dodgems in their weed overgrown enclosure. It was a strangely sad reminder of the normality that was wrenched away from this city. Through a stand of birch trees at the far side of this was a wall about seven feet high and when we reached it The Monkey leapt easily up to its top and adjusted his night vision goggles. He looked down at me with that monkey grin and I boosted myself up next to him with only minimal scrambling. There, on the other side of another open area stood the black shape of a tower with a dome on top. I looked at the finger and it was pointing directly towards it so we dropped over the wall and watched as a ghoul and a nerd followed us up and over; Monster High with an effortless flowing motion as seen in all the best horror/kung fu movies, and Dave with a series of grunts and curses.

It was obvious as we got closer to the church that it was one of the very few buildings not to have been ransacked. The door was closed but not locked and inside was neat if dusty. As you would expect all of the religious trappings had been removed and most likely carried off to another church by the priest at the time of the meltdown. It wasn’t a big church and I was beginning to think that maybe the finger was pointing to something beyond it rather than the church itself when Dave found the crypt. We stood at the top of the stairs and the finger pointed straight down them so down we went.

Monster High led the way as this was her element, and not for the first time I marvelled at how she and her sisters’ eyes glowed slightly in the dark. And it was really really fucking dark. We had tried to keep light to a minimum just in case there were any hostiles about but down there we cracked some Cyalume sticks (sort of a big party glow stick) and in the strange chemical glow we got our first glimpse of the obviously medieval crypt. We all looked at the finger and the finger pointed to a stone slab at the far end. It proved difficult to budge but between us we managed to slide it off the top of the sarcophagus enough that we could see inside, and instead of skeletal remains we found a tablet of stone carved with some very Viking-looking runes.

So now we have slab of rock etched with what are definitely runes sitting on the coffee table in the living room and the black hole has gone, well, black again…

The Prof was a bit reticent when we contacted him today – I think he is still having bad dreams – but we sent him over a photo of a small part of the rune stone and he was immediately hooked. We photographed the rest of the stone and sent the pics over to him, The Monkey had the feeling he wouldn’t be able to resist and he was right. It’s not the sort of thing Google translate can help with so it’s a good job he’s interested.

Getting feedback from the Prof – seems the runes form part of an epic poem. He has some bods checking it out but has only given them small sections each to keep them out of the bigger loop. I asked him why a slab of Viking poetry would be in the crypt of a Ukrainian church? There then followed a lecture on how the Vikings founded Kiev and how they traded along the rivers from the Baltic to the Black Sea. It is a bit too much to relate here, but translates to, ‘Why the fuck wouldn’t there be Viking artifacts in the Ukraine?’ Okay, point taken… The monkey pendant is glowing again…