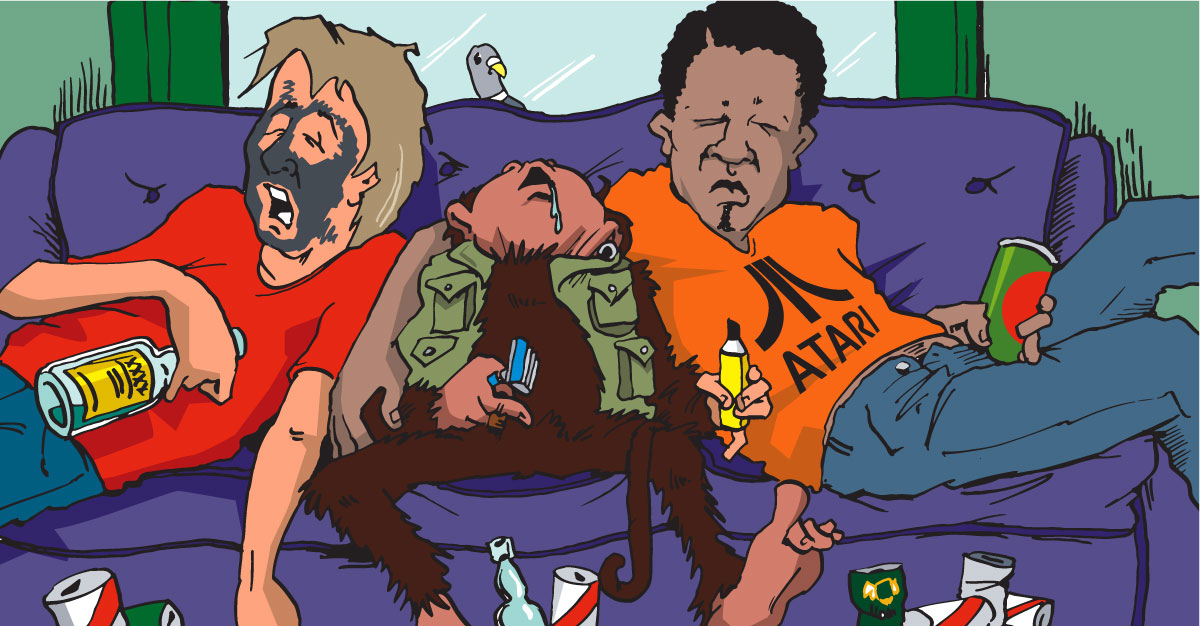 I survived without getting graffiti all over my face, mainly because The Monkey was so busy persecuting the nerds even before they passed out. Kev actually looked like Papa Lazarou by the time The Monkey had finished – that is going to take some serious scrubbing to remove and I think quite a lot of skin will come with it. Ouch! Dave got off very lightly, being black The Monkey could not use Sharpies on him, so he contented himself with shaving his eyebrows off. I think he has a pass at the moment after being so heavily drugged by The Monkey on their first encounter. Anyway, we managed to avoid loads of vomit in the house although the garden looked a proper mess especially as it was very cold last night, and the puke all froze. Nice treat for the birds…

Saw my accountant (had to wear shades though as my head was banging, think he may of thought it was some random fashion statement) and worked out that I can disappear for an unspecified number of weeks to South East Asia and put most of it through my business. Result!  When I got back I told The Monkey the good news and he managed a grin even though he is in a pitiful state. I still think he is suffering from the concussion of the explosion and having a massive hangover is not the best thing. There has been a lot of lying down in the dark done by all concerned today…

Went to the Bunker again today. The Monkey said it would be the best place to get ‘gear’ for our trip. The dude behind the counter looked at him and said, ‘Get caught in a blast?’, The Monkey nodded, and they just shared another one of those been there, done that looks and the guy tapped his leg which made a hollow, metallic sound. Where do these fucking people come from?! We bought several items including small camo day sacks, a couple of new machetes, various bits of webbing, new boots for me, light weight combat trousers and smocks and a couple of bottles of 100% Deet for the mozzies. The Monkey says he will order some more stuff on-line and some other kit we will pick up ‘in country’ – this I am guessing is the sort of stuff that would get us arrested if we carried it across borders.

I have booked open tickets for our flights as we have no idea how long we will be out there but we are flying from Heathrow to Kuala Lumpur and then to Phnom Penh on April 1st (seemed fitting), and then we will see what happens…

The Monkey is outraged that we have to pay for travel insurance. I don’t think he can separate it from the on-line adverts and phone calls we get stating that ‘You may have been in an accident…’ and then attempt to convince you that for the good of all concerned you need to litigate and give them 60% for the privilege.

Then he stomped into the kitchen, aiming a swing at a frantically dodging Tony as he passed, and marched back into the living room and slammed a bottle of tequila onto the table. A little pain relief perhaps?

So, the nerds have assembled a ring of monitoring devices around the edge of the black hole. They are sure that there is ‘something’ on the other side that is moving and testing the boundaries of the opening. They don’t think that it can get through at the moment, but it is definitely looking. Oh, and Kev’s face is still quite Sharpie stained.

Meanwhile The Monkey has found the Pogues on my iPod and is ripping the living room up to The Sick Bed of Cuchulainn. He does a mean jig especially when he is powered by Jack. If you can’t beat ‘em join ‘em. He is singing loudly – something about devils with bottles and dreaming of foreign lands. That seems strangely prophetic…

Booked in with the practice nurse at the docs to get a whole raft of vaccinations. The Monkey laughed at me until I told him he would need a Yellow Fever vaccination certificate or they wouldn’t let him across boarders in the region – not so cocky now is he.

The nerds have had a lovely day measuring electrical field disturbances emanating from the black hole. There has been much heated debate amongst them as to the possibility that it is a form of corridor between different locations in space, I heard the word ‘Stargate’ used on several occasions with absolutely no irony. The other current contender is the possibility that it is a door between different dimensions. Much babbling about string theory and quantum foam along with references to film and TV programmes. Me and The Monkey hung in there for as long as possible then we came down to the living room to look at maps and watch Total Wipeout…

Oh England, what have you done… The Monkey had money on you winning the rugby and the ensuing drunken carnage was terrible to behold. He has no bias as far as nationalities are concerned but he doesn’t take losing very well and several gloating South Africans in the pub couldn’t take a hint and will be very sore tomorrow. Managed to get him out of town before the police turned up, and I let him have a proper simian fit on the beach in the rain until he was calm enough to get on a bus. Fortunately, one look at The Monkey was enough to keep the nerds from saying anything stupid and getting themselves savaged. I wouldn’t mind but The Monkey couldn’t care less about rugby – he likes the inherent violence but apart from that he doesn’t give a fuck.

Had a sudden horrible thought today – The Monkey hasn’t got a passport!! He got to Amsterdam on a merchant ship, he got back to the UK with me on the ferry and no one asked for anything then, but if we are going to get on an airplane at Heathrow he is going to need paperwork – and it’s only two weeks away! Ah! Blind panic!! (The fact that he is a monkey doesn’t really enter into it – no one seems to care about that).

So I looked on the internet to see how quickly we could get him a passport and it seems if we drove to the nearest passport office and paid extra we could get him one in time but, and it’s a big but, he is not a British national so that causes all sorts of problems. I grabbed The Monkey and explained, or rather shouted the situation at him. The Monkey just gave me a look and went to his room and after a few minutes came back with four passports, one UK, one Thai, and two Canadian. Seems a ‘friend’ has a useful line in fake documents and The Monkey has had these for a while ‘just in case’. I asked him why two Canadian passports and he handed one to me with my face in it. ‘Just in case’, he said. And why Canadian I asked? No one bothers with Canadians was the answer…

Count to thirty, no peeking!